So far so good for Carlo 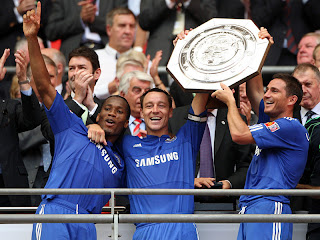 It was nice to escape to sunny Cuba for a week as huge amounts of water continue to come down from Havens, here in Ontario. Since my "off grid" plan is yet to come to any sort of fruition, I was worried that we will loose power and I will not be able to watch replay of a Community Shield.
What a cracking game it turned out to be! We had a bit of everything, bad and good goals, missed and fantastic saves, crunching tackles, controversy and First ref bashing by Fergie.
I was a little surprised to see Ivanovic to start ahead of Bosingwa and was glad to see Carvalho (eventual man of the match) back in a starting lineup.

First half belonged to United. Nani was tormenting Ivanovic who struggled to cope with the pace and trickery of young Portuguese player, eventually picking up well deserved yellow card. Nani opened scoring with a cracking goal and seemed that he is ready to take over Ronaldos spotlight, however his night was prematurely terminated by John Terry's clean tackle. Nani walked off the pitch in a makeshift arm sling. After reading todays papers, he's got a bit of a dislocated shoulder and naturally looking for speedy recovery. Petr Cech probably should have had saved Nani's rocket, but he redeemed himself with number of great saves later on.

Berbatov had flashes of brilliance and came close to scoring on more than one occasion. He seem to have great understanding with Park whom looked dangerous early on.

Chelsea counters produced little to trouble Ben Foster with descent strikes from Drogba and Anelka. In general, many of passes were behind intended recipients and at times we looked a bit one dimensional with mainly wayward long crosses. Essien probably should have done better with his towering header attempt and Malouda's attempted volley from 2-3 meters also should have been a goal. We seemed slower than United and were loosing midfield battles. Lampard was well covered and was unable to influence game. It seemed to me that his positioning was a bit off with number of passes to/from him going to United players instead.

When first half came to an end I was quite happy that we were down by one and was hoping that we could do what we did against Everton, come back from behind and win the game.

Ivanovic was substituted for Bosingwa during half time, logical choice due to yellow card and pace that Bosingwa offers. Not sure what Carlo told his troops, but Chelsea was a different team, we've started to control tempo and had number of descent attacks. During one of such attacks, somehow Lampard retained ball with 3 United players around him but he managed to pass to Malouda who attempted to flick ball to Drogba, whom nearly got nice punch from Ben Fosters weak clearance, which ended up on in the net after diving Carvalho's header. It was a scrappy goal but a goal nonetheless, game was tied. Blue side of Wembley was in frenzy...

Mikel was substituted for Ballack whom seem to continue his spat with Evra. Two exchanged harsh tackles, one which earned Evra yellow card. Then came moment when Ballack blocked off Evra, in plain refs view. Fergie deemed that an elbow later on, in any case, Evra was sprawled on the pitch "injured" while ball came to Rooney who didn't kick ball out of bounds but tried to continue United attack. Few seconds later he lost the ball to the Chelsea player, then ball ended up at Drogba's feet whom cleverly took 2 defenders with him while flicking ball to Frank Lampard. Lamps didn't make a mistake, he shot ball with enough power that it went through Fosters hands into the net. United players were furious and surrounded the ref. It was interesting to watch that Rooney was playing a peacemaker, quite a contrast to Rooney we know. Complaints fell on deaf ears, goal stood. You see, United felt that ref should have blown a whistle, just as he did earlier when one of the United players stepped on Ballack. Evra's "injury" evaporated quite fast when he jumped up to argue with the ref, and reds have audacity to call Ballack a cheat. Just think of elbow on Drogba earlier in the game! He didn't go on moaning to the ref, instead he got up and went on with the game.

Fergie fumed and eventually threw on 4 fresh players. Them move has worked, United started to press and eventually Rooney showed his world class when he tied the game, it was 90th minute. He banged his chest and United badge in front of Chelsea fans triumphant! Game was going to penalties...

Penalties is something that Chelsea fans hate. It was Terry's miss that cost us Champion League in Moscow.. It has been years since we won a shootout.

Lampard was first to shoot. It was clinical finish, Foster had no chance. Lamps grabbed the ball and held it above his head to show it to all United fans.
Ryan Giggs, Mr. United himself, took first spot kick for United. Petr saves with his feet!
Ballack was second to shoot, it was a beauty, as good of a spot kick as you'd ever see.
Carrick for United didn't miss. It was 2-1 for Chelsea at this point.
Drogba for Chelsea. Once again, memories of Moscow come flooding. Drogs got a red card and had no chance to take a spot kick then, will he score now? Answer is yes, yet another clinical finish by Drogs. 3-1 Chelsea!

I am not sure why Evra was chosen to shoot next? When I saw him come up to the spot I was quite happy that Rooney wasn't taking it next. Evra blew it, spot kick lacked power and Cech correctly guessed direction.
Next was Kalou and he didn't make a mistake. 4-1, Chelsea win first trophy of the season, so far so good for Carlo.
Posted by Emigre at 10:37 AM
Labels: Chelsea, Community Shield, Manchester United, Nani