Fifa has announced that matches in the Europa League – formerly the Uefa Cup – next season will be played with two extra assistant referees behind the goal-lines as part of an experiment instead of using any sort of technology. This move surely is a step into right direction and is a brainchild of Michel Platini. I do wonder how successfull this will be, especially when it is evident that referee numbers have been going down.

"The International FA board decided 'let's have experiments with two additional assistant referees' and we were looking where we can have such experiments. Now we have found a solution together with Michel Platini and Uefa," said the Fifa president, Sepp Blatter. 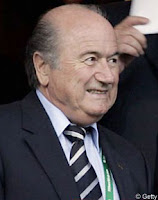 Surely Blatter is a man of his word, in 2006 he said:
"As long I am president, it will only be goal-line technology. Until I am no longer president, there will be no chance (for video replays)."

I am not arguing for replays, goal line technology should be enough (unless Ovrebo is a match ref), but it has been number of years and best they can come up with is 2 extra assistants?

I am counting the days until this dinosaur has moved on and allowed someone with progressive views to start process of bringing football in to 21st century.
Posted by Emigre at 10:58 AM
Labels: 5 referees, Blatter, video replay technology