Another day, another signing. 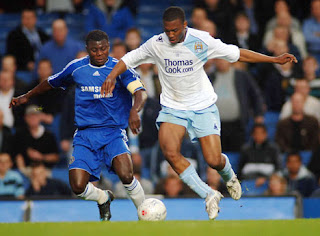 This shouldn't come as a big surprise to anyone as this transfer has been well documented, Chelsea FC today has announced that Daniel Sturridge has signed a four year deal. 6 foot 2 forward started his career at Aston Villa with stint at Coventry. When he was 13 he joined Man City Academy where he remained until this year. At the end of the 2008–09 season, the Manchester City fans voted Sturridge as the Manchester City Young Player of the Season.
Signing of the 19 year old, should be welcomed by Chelsea fans as ageing squad is in need of some your injection. Daniels preferred position is forward and his is capable of playing on the wing.
Next order of the business for Carlo surely will be Zhirkov who's signing is highly anticipated within days.